This is an attempt at documenting a little project I've been working on, on and off, for the last while. I hope to have enough material and enough momentum for a few posts.

I won this phone at a claw machine.

Well, not really a claw machine but a twist on the same concept where you have to position then trigger a linear actuator so that the rod that extends goes through a narrow-ish keyhole. The machine looked like this and before you ask, I got the phone on my eighth try.

So what about that phone? The IMEI sticker beneath the battery claims it's a Nam-Phone G40C while the serigraphy on the backplate informs us that it is a Nam-Gear product, designed by Namco and made in China. Since Namco is a well-known maker of coin-op games, it makes sense that they'd be involved in the production of prizes for their games. 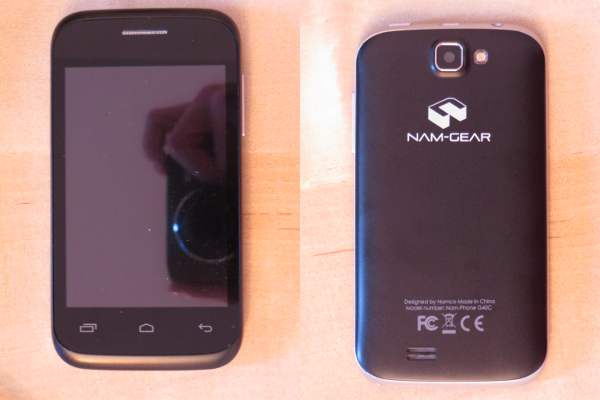 I unboxed the phone, turned it on and proceeded to play with it. Here are my first impressions, in order:

I realised at that point that this wasn't a device I wanted to use in earnest, or at least not with the firmware it had out of the box. My next thought was to try and find out whether I could use a build of CyanogenMod or some other trusted community build of Android that would work on this device.

First, of course, I'd have to learn more about the device. I used a spare Google account to access the Google Play market and downloaded two essential system info apps: Under the Hood and CPU-Z.

Here's a summary of the phone's specs, taken from CPU-Z: 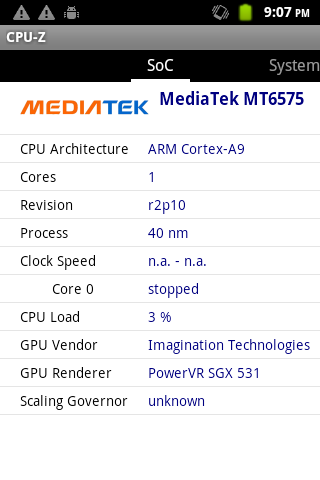 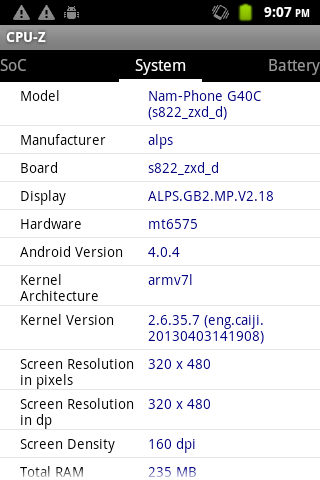 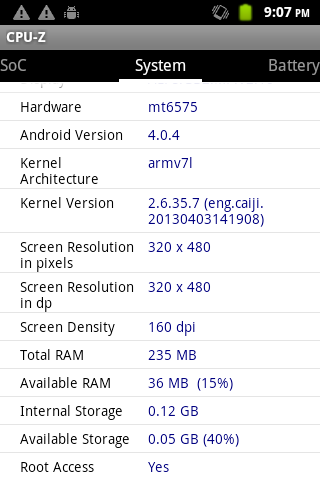 Android apps can request root privileges from Superuser on a phone that has been rooted, that is to say on which an implementation of su(1) has been installed. The Superuser app acts as an authorization broker, but it is the underlying su(1) executable that performs the actual privilege escalation since the setuid bit in its permission mode means it is executed with the privileges of its owner, viz. root. Wikipedia has a good primer on setuid and there's more here.

At any rate, rooting a phone is a big deal for Android power-users precisely because su(1) is typically not found in the firmware of a phone when it leaves the factory.

Now let's look at the last line from that screenshot again: 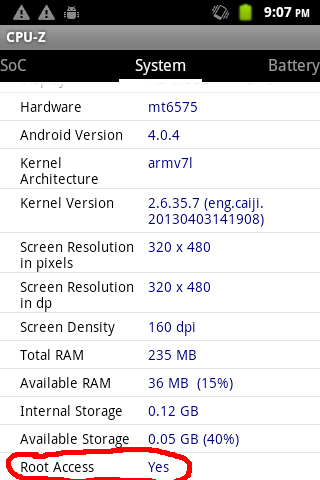 Could it be that this phone has su(1) in its factory firmware? I installed Android Terminal Emulator on the phone to have a quick look around the filesystem:

su(1) is definitely there. What's more, there's a file named tcpdump in /system/xbin belonging to group root where all others files there belong to shell. That's... interesting.

tcpdump(1) is a packet capture tool. Its sole purpose is to record network traffic to a file for future analysis. As a network-y kinda guy, I'm a huge fan but it's a bit alarming to find it preloaded on a customer device. I couldn't find any mention of it in the UI, so I must conclude that it isn't there to be used interactively by the user. Which raises the question: why does this phone ship with privilege escalation and packet capture tools? Something's fishy here.

This was the starting point for this project. I have a device with something that looks a bit like malware on it. I have the time, the inclination and hopefully the skills to find out more.

In future posts, I aim to achieve the following goals:

Next » Hacklog #1: Preparing a work VM